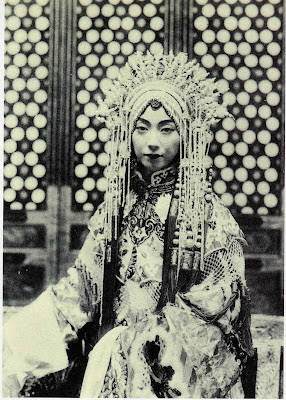 Do you think this is a Chinese Princess from another time?
Yes and No.
This is Mei Lanfang (1894-1961), husband and father in the stage dress of a young woman - the only roles he played in Beijing Opera. Also called Peking Opera or Jingju Opera.
Mei Lanfang was born in an actors' family. He started to study Chinese Opera at the age of eight and performed for the first time when he was twelve. He also was the first Chinese to introduce Beijing Opera to the World with his tours to Japan in 1919 and 1924, to the US in 1930 and the USSR in 1932 and 1935.

He was not only a great actor, but also a painter. He studied Chinese painting with his painter friends every day. But later concentrated more on acting again as Beijing Opera requests not only talent for singing, but also for dancing and martial art. The singing is very different form the Western Opera. All actors, male or female roles, seem to sing in these high tones and because they do not move the lips that much, it is difficult for an outsider to tell who is singing on the stage right now and who is just posing. 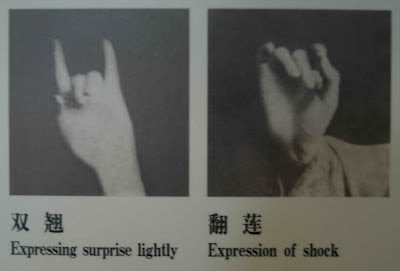 There a lots of different gestures that need to be known to read the mood of the different roles. I just post two of them that seemed interesting to learn. 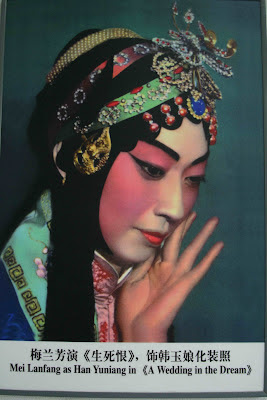 Mei Lanfang has influenced different female roles in the Beijing Opera as well as the colourful make-up. At his time on stage, female roles were performed by male actors. 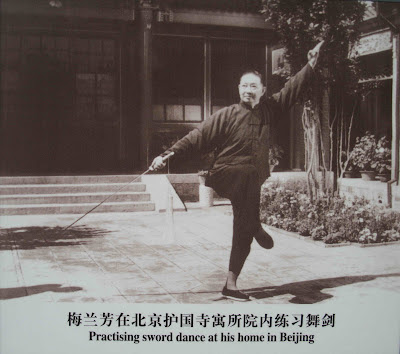 This is him, practicing sword dance in his courtyard house in Beijing - that today is a museum (see previous post) and open to public.


The video shows him on stage performing a sword dance. I guess, it is him singing.

More info on the Mei Lanfang Website
Posted by - Susan -

Fascinating story. Thanks for telling me about Mei Lanfang. I know the Beijing Opera is very famous, but I've never had the privilege of seeing them perform.