The Sartorialist in Beijing The Sartorialist was in Beijing and this is the street picture he posted today on his blog.

Scott Schuman, the writer behind The Sartorialist, spent 15 years in sales and marketing dealing with department and specialty stores all around the world before he started his blog in September 2005. He always "felt that there was a disconnect between what I was selling in the showroom and what I was seeing real people (really cool people) wearing in real life". He combined his passion for fashion and photography and shares his photos of cool people in the streets of New York, Milan and Paris on his blog. His Sartorialist blog is so popular that he gets over 23.000 page hits daily. And his latest news are that he is going to do a page every month in Vogue China starting January or February.

His trip to China was sponsored by Lane Crawford (store opening). Last week he was in Beijing. I am looking forward to more of his pictures from the streets of Beijing. 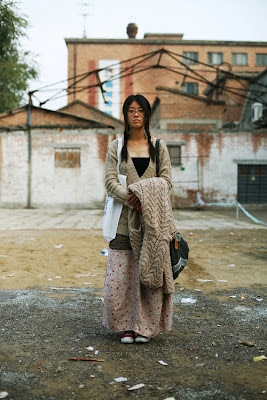 Here she is again, bigger than above - in typical 'Beijing Onion style'. This photo was taken by The Sartorialist last week at Dashanzi Art District (original 798 Factory) in Beijing.
Posted by - Susan - 6 comments:

Adventures at the Green T. House

We wanted to spend a nice, elegant and inspiring evening at the Green T. House, downtown Beijing. We wanted to show our visiting foreign friends what kind of cool dining experience Beijing has to offer.

It was last Saturday evening and I booked for four people at the white table as I do not like the canteen style narrow seating at the long table in the middle. The white tables in the back were empty, except for the four of us and some others that left shortly after our arrival at 8pm. While wondering about the many available seats at an "in place" on a Saturday night we ordered our favorites. We started to eat and enjoyed the atmosphere when all in a sudden a very loud music came out of the speakers. So loud we could not understand each other. A noise that almost hurt your ears - and there she came (or he) the Beijing Opera performer. I wondered what has happened to the Green T. House that they offer that kind of touristic entertainment program. If I want to see Beijing Opera I go to a Beijing Opera performance. And if I go to a restaurant I expect to eat.

But that is not the whole story. To crown our lovely day we ordered two Brownies for desert that are served in a spectacular setting with smoky dried ice. Unfortunately the Brownies were just liquid dough. When complaining we were treated like everywhere else in China - just poor. We were explained that this is the Green T. House signature dish. We said, we used to come before and we are used to have it in a more baked way... the answer was: Really? - and nothing happened. After a while I said that we would like to talk to the manager who was friendly and offered us new brownies or maybe another desert. This was fair, we thought, and we ordered the Green T. ice cream and Bitter Lemon Pudding as we had lost confidence in the brownies. The extremely overpriced ice cream, four tiny scoops of different taste for 168 kuai (!) was tasty, but not enough for the money.

However the highlight of the evening was the burning and later exploding Bitter Lemon Pudding. It was burning and burning and the decorative chocolate sheet was melting and melting. The staff only took care of it, when a piece of cooking chocolate - BAM ! - exploded and flew over the table and hit my friend just over the eye. They came with a napkin filled with ice cubes to cool his burned skin.
And all what we got was a "sorry".
Do you think, the desert was canceled from the invoice? No.
We were too tired to argue.
We just won't come back.

Email ThisBlogThis!Share to TwitterShare to FacebookShare to Pinterest
Labels: Restaurants

Commune of the Children 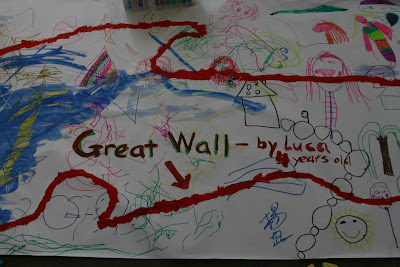 For the Golden Week we went outside Beijing, not far, only 1 hour North East on Badaling Highway and took exit 16 to the Commune at the Great Wall, a kind of architecture exhibition resort managed by Kempinski.

We had a great time. It was the picture perfect setting with blue autumn skies and views of the Great Wall of China.

And then, there was this amazing kids' club: 'Commune of the Children'. Just opposite the club house conveniently located this white two storey house is entirely designed for tots (2y.) to teens (12y.). When we first entered to have a look, we were welcomed by an English speaking Chinese lady which had time to show us around. I was so overwhelmed by that lovely little kids' paradise with so many beautiful details, I wanted to be a kid spending the day painting on the floor, baking cookies, making moon cakes, planting herbs, scoring goals outdoors, disguising in fancy costumes or having a tea from a tiny wooden tea pot. The furniture and facilities are designed according to kids’s heights and the interior deco is bright and colorful. I could not help and took lots of photos. Here is my selection: 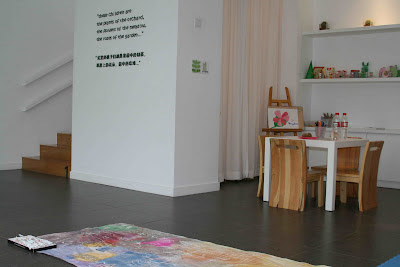 Painting on the floor in the Art Center 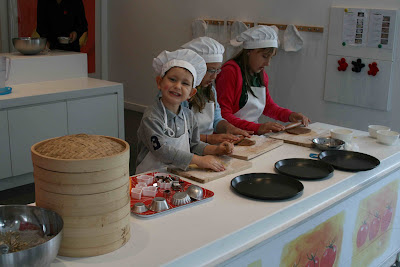 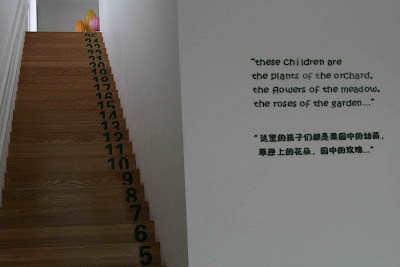 25 steps to the second floor with more fun areas... 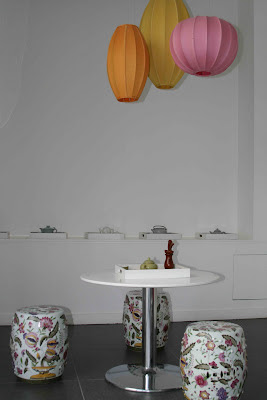 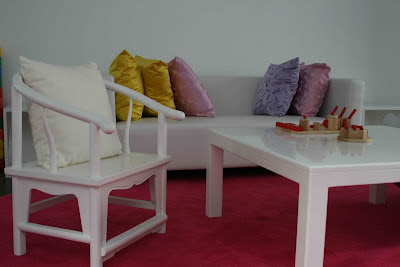 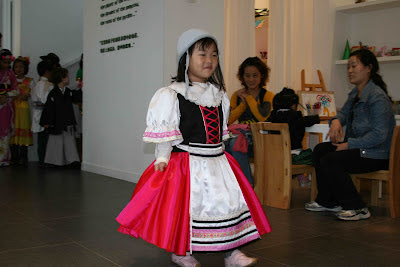 At the end of the day there was a fashion show of cultural custumes. --> Parents and kids very happy!

The was also an entire room just for book lovers having lots of English and Chinese children books on display.

The kids' club opens daily from 9am to 5pm.
Through out the week different activities are scheduled form 9.30 am to 4.30 pm.
The kids' club is open on national holidays.
Half day is 150 RMB per kid, or 290 RMB for the full day.
No reservation is required.

You can have either lunch together with your kid on the terrace of the clubhouse or have the kids' lunch menu (around 60 RMB) delivered to the kids club.

Birthday parties can be booked - and a fancy lunch for the parents...

Commune at the Great Wall together with Commune of the Children is an absolutely cool place to visit. You escape Beijing's air pollution and can enjoy nature, art and outdoor activities including hiking the Commune's private part of the Great Wall, that is only accessible for hotel guests and visitors.

Invited by the Empress of China 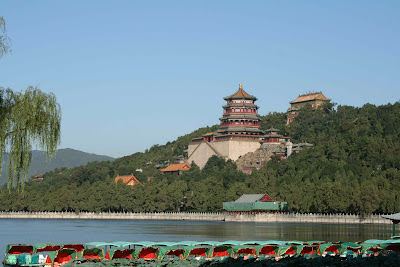 Recently, on a beautiful early September morning, I payed a visit to Beijing's Summer Palace (yiheyuan). 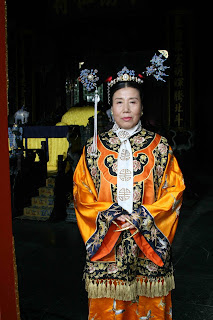 I had received an invitation to an audience with the Empress Dowager Cixi. 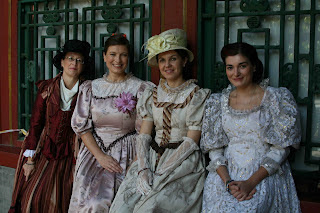 I was in company of three other elegant ladies from various embassies in Peking. 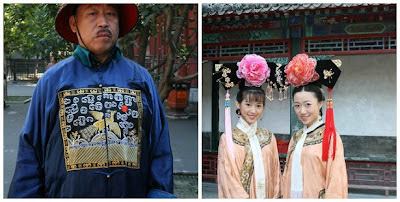 At the Summer Palace, we were accompanied by an eunuch guard and greeted by two young Princesses. 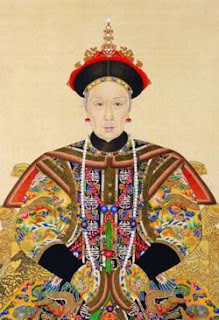 "None of us had ever been present at an audience. We all had heard much of the Empress Dowager Cixi, and above all things else we were anxious to see her whom they called the "The Dragon Lady."

"As we looked at the Empress Dowager seated upon her throne (...) awed by her majestic bearing and surroundings, we involuntarily gave the three courtesies required from those entering the imperial presence. We could not but feel that this stately woman who sat upon the throne was every inch an empress. In her hands rested the weal or woe of one-third of the human race. Her brilliant black eyes seemed to read our thoughts. Indeed she prides herself upon the fact that at a glance she can read the character of every one that appears before her."

The above real story took place in summer 1903.

In reality, my invitation to the Summer Palace was not by the Empress herself but by CCTV, the biggest Chinese television company. After they had made a documentary about the Forbidden City, they now are working on a documentary about the Summer Palace. Four foreign actresses were wanted for the scene in 1903, when Empress Cixi met ladies from foreign embassies for an audience in her Summer Palace. This took place after the boxer rebellion in Beijing against foreigners and foreign-influences.

My western colleagues, an American, a Spanish and a Russian lady, and I enjoyed our new job a lot. Although we had to start early in the morning around 3am and 5am respectively for make-up and hair. The dressing was done later on the scene - with tourists taking pictures of us. 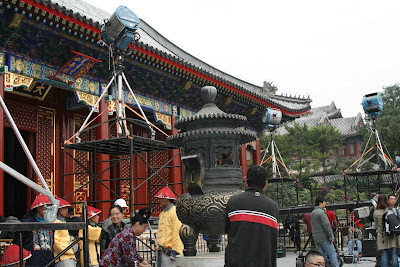 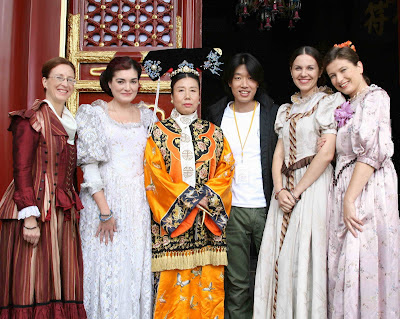 Our last picture shows us, the foreign diplomatic ladies, together with Empress Cixi and handsome director Wang Wei Da in front of the last setting, the Hall of Longevity at the Summer Palace in Beijing.

The documentary will be on air on Channel CCTV 1 next year, in February or March, reaching out to 1,300,000,000 Chinese and some foreigners.

The Summer Palace was added to UNESCO's list of World Heritage Sites in 1998.

more links:
Court Life in China by Isaac Taylor Headland (source of the quotation)
About Cixi or TzuhSi
About Boxer Rebellion
About Summer Palace 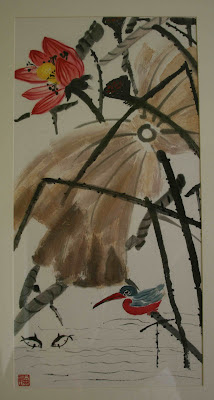 This is the October Golden Week. The Middle Kingdom is on holiday. And I am just posting another Chinese ink-wash painting. I think, again the original is from famous Qi BaiShi.
Posted by - Susan - 3 comments: