CCTV Tower: Ready to move in - Who would have thought it will take so long? 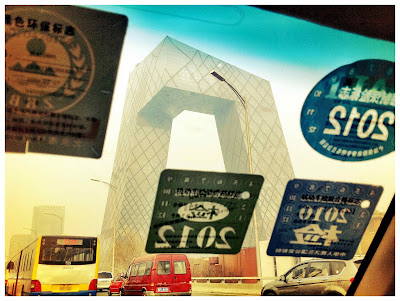 Beijing CCTV Tower out of a taxi cab in February 2012

The CCTV Tower, now, one of the most famous landmarks in Beijing was proudly presented to the world during the Olympics in 2008. From the outside, the building seems finished - since over for years. But who would have thought, that only now, in these days, the CCTV employees are gradually moving from their old office in a communist building to the new avant-garde headquarters?!

The construction of this futuristic monument, started in Beijing back in 2004. For the speed of China, regarding demolishing old and building new, this project is indeed an exception. But it's architecture is as well exceptional.

Rotterdam-based star architect Rem Koolhaas and his firm Office for Metropolitan Architecture (OMA) co-designed the building with the young German architect Ole Scheeren. OMA won the design competition for the project ten years ago. Scheeren calls the L-shaped elements, that connect the two angled towers, a "loop," a symbol of cooperation. The CCTV Tower is said to be the world's largest media building, and it contains more expensive technology than any other structure. It's completion was scheduled to be in May 2009.

But why is the tower only now ready to move in?

During Chinese New Year in February 2009, an uncompleted neighbouring building that is part of the complex, caught fire when illegal fireworks were launched by CCTV employees. It took about five hours and 600 fire fighters to get the massive fire under control. The building was severely damaged. This incident delayed the whole project. (To read more about the fire go here).

The Mandarin Oriental Hotel Beijing which was supposed to be the main tenant in this building (in the one that caught fire, not in the CCTV tower) has no opening date scheduled. The building is still under construction. (If anyone has more information, please let us know.)

Email ThisBlogThis!Share to TwitterShare to FacebookShare to Pinterest
Labels: architecture