My friend and Beijing based artist Vanessa Notley is having another exhibition this weekend ! She and two international fellow artists are showing paintings, sculptures and drawings. 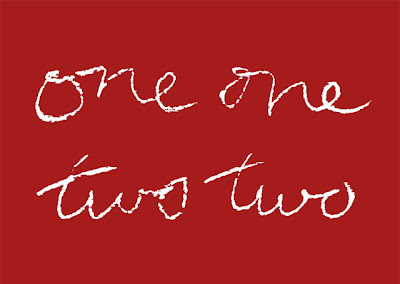 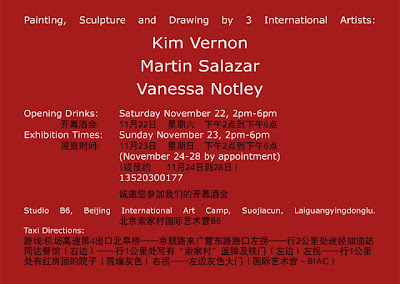 Some of Vanessa's sculptures: 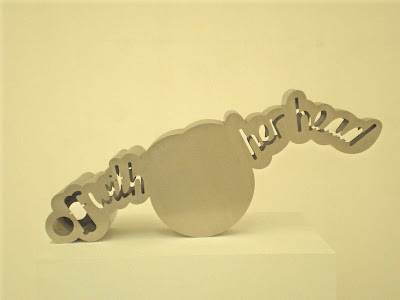 off with her head... 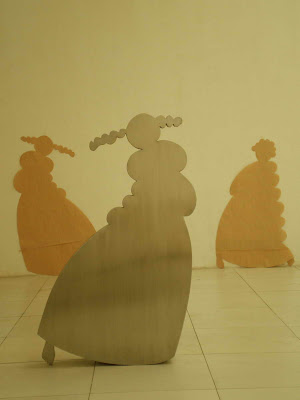 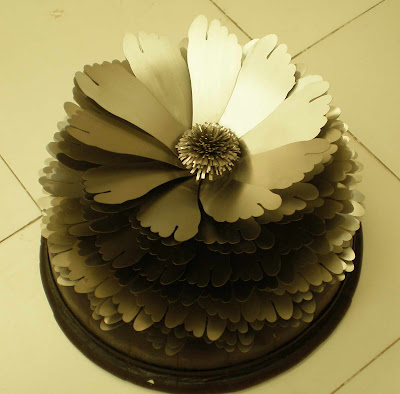 "Scottish born artist Vanessa Notley has been living, working and exhibiting in Beijing for almost three years. Before coming to China, she lived in France for many years where she studied and worked at the École Nationale des Beaux Arts in Bourges before moving to the South of France. She continues to be represented by the galleries AL/MA in Montpellier and Jacques Girard in Toulouse.
Vanessa Notley’s work plays with language (words and sounds, translations and entertaining idiomatic expressions and meanings) and with a certain humour and flexibility she seeks to give language a visual, tangible and sometimes nonsensical form in steel and fabric."
(source: invitation to her exhibition at Embassy House, Beijing on May 18th - 23rd 2008):

Email ThisBlogThis!Share to TwitterShare to FacebookShare to Pinterest
Labels: Art 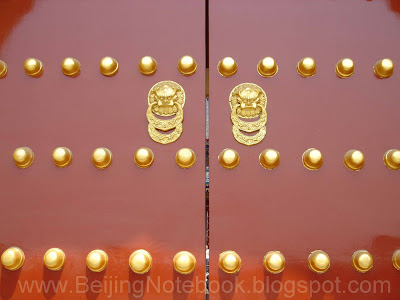 I am not sure if I have ever written that Beijing is an ugly city. However I have reflected on it in my mind, yes. It is when you have to say good-bye to something or someone and in order to not be too sad, you try to be not too romantic.

And for me, cities like Paris and Rome are more easy to like then Beijing. They are obviously beautiful.

Beijing has a lot of very dull and grey residential buildings which are typical for communist countries. After 3 years living in Beijing, I consider these tower blocks as part of the Beijing charm. They always share a garden area where older people can work out and kids can play. Balconies are decorated with plants or bird cages. Run down dusty areas with red lanterns (or a red chair like in the pic of my last post) and the old hutongs - not estimated by the locals, but appreciated by the foreigners - are making Beijing likeable. If you have an eye for that. 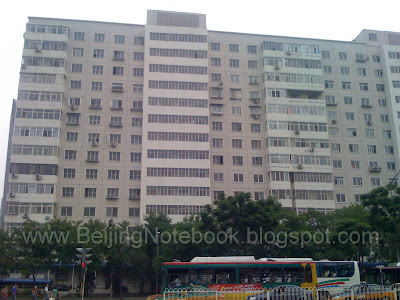 When you are only on a journey through, lets say for a 2 day business trip, you hardly can find beauty in Beijing. More likely you find smog.

To discover Beijing's charm, you need a bit more time or a local guide on your side. And if you even come here for a period of 3 years (the usual expat term) you have to adapt to your environment sooner or later otherwise you suffer.

The experienced expat will adapt quickly and find many things that make Beijing likeable.

Fans of Asia will like old Beijing, its hutongs, its hidden courtyard houses, the lakes, the parks, the temples, the Imperial architecture, the food (varies by region a lot), the markets (vegetable as well as clothes), the bargains,... ah and the red lanterns, e.g in Ghost street. Old people in the parks playing chess or doing tai qi. Flying kites in the middle of a traffic conjunction. The million bicycles. Winter in Beijing with skiing on slopes of artificial snow and ice skating on frozen lakes. 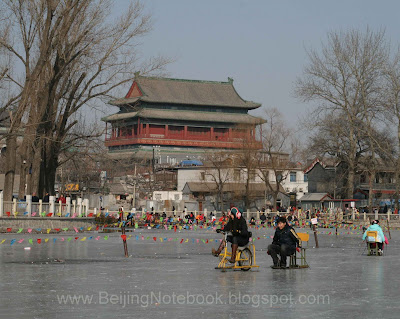 There are those expats from big companies that live a luxury expat life in Beijing: chic city apartments or US style suburban villas, drivers, ayis. But even for other expats who work for their own company or are employed with a local contract, Beijing live is still cheaper then back home. Eating out regularly is not a luxury anymore. The choice of international restaurants is amazing. Going out on Saturdays is normal for parents as ayis can babysit their kids (for little money). And taking a taxi is normal because affordable.

Shopping is also a big advantage of Beijing. These markets selling fakes and offering bargains are one of the tourist attractions. No tourist group that has not shopping on their itinerary. But not only fakes, also antiques and reproductions are highly on demand. And not only markets also luxury western-style shopping malls are on the rise.
Shopping is a popular exercise, not only for tourists, also for expats and of course for the local Chinese as well. Shopping from 9 to 9 daily.

I liked to live in Beijing because every day was different and there were several options for activities every day.
I could discover endlessly new things. 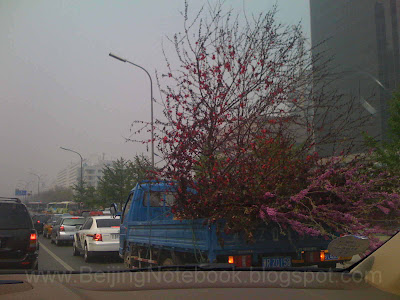 The expat community was quiet strong. It was so much easier to get to know other people then in any other town of my own country.
Although Chinese culture seems to vanish or not to be popular among Chinese anymore, foreigners can learn a lot.
There are million of photo motifs.
There are lot of possibilities for day trips (more then in Shanghai).

My son still like China better then Germany or Italy as he enjoyed a fun live. His ayi had always time to play with him and he could play in our calm street of the compound freely with his friend.

Related posts:
Beijing: Expat Interview
Beijing and what to do with your time
Charming courtyards in Beijing
Skiing in Beijing
Posted by - Susan - No comments:

Red Chair in Qianmen
Originally uploaded by nataliebehring.com
Another great shot by Nathalie Behring that visualize Beijing's old charm. Unfortunately (for some fortunately) this place has gone now.

Follow the link and find more CHAIRS in a photo set at flickr. Thanks for sharing!
Posted by - Susan - No comments: 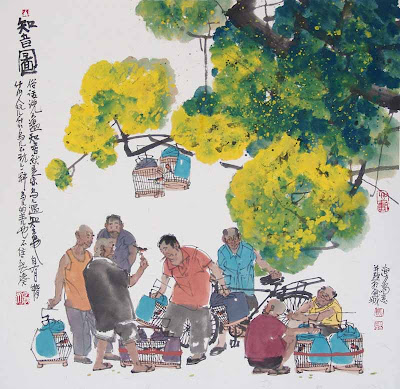 This morning (in Germany) my son (5) saw an airline advertising in the newspaper and started to cry: I miss China ! I want to fly to China and see my friends...

We checked the time and said, okay, lets call your friends. And shortly after he was talking on the phone - not only to his best friend but also second best friend - as his two friends were just playing together.

The two best friends' English was meanwhile better then our son's English (he only speaks German now). And the two boys go to school (British/Chinese system) were they learn already writing - and apparently they love their school.

While my boy goes to a German kindergarten where they have a pre-school class once a week. German system ... here you start school when 6 years old. Before that it is basically playing in kindergarten, a lot of free playing time - they learn a lot of social skills (I was told).

I also learned that our house in Beijing (East Lake) is still empty. And it is not the only one in that compound. Apparently the economic crisis also has some impact there. But I think the competition on the real estate market is big - many new nice villas are available (however outside the city) and western style apartments are more attractive then the old villas in East Lake.

However I would always go back to East Lake. Just a fantastic location.

As we can not follow our friends' Christmas travel plans, we said that we will visit early next year. It will be nice to see old friends again and do some shopping.

Next Saturday we wont miss China that much.
My son and I, go to Chinese school each Saturday morning.
Yes, here in Germany!
It is funny, it feels a bit exotic, a little international flair on Saturday mornings.
And it is funny as in Beijing, we went to Italian school on Saturday mornings.
And the most funny thing about that Chinese school is, that it is actually a Taiwanese school !
I was not really aware of the difference. I just wanted to continue to learn Chinese and not forget what I have already learned. Meanwhile I noticed some differences between the Mainland Chinese and the Taiwanese. Also because the Taiwanese told me some differences right away.

If you have read this post until here, I will reward you with some more beautiful Chinese paintings from Creation Gallery in Beijing: 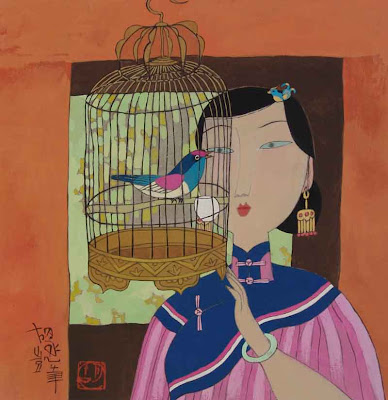 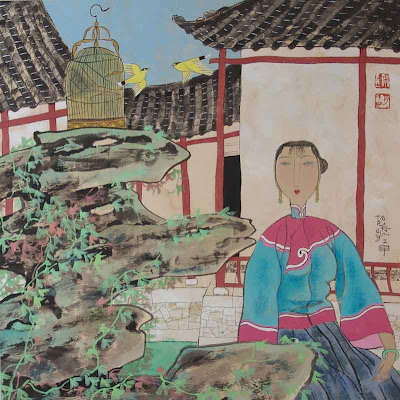 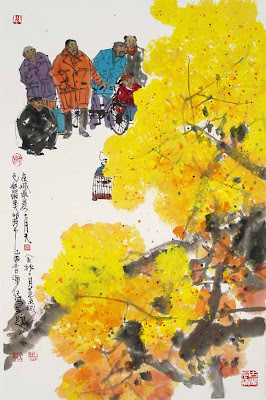 Remark about the bird cages:
All paintings show birdcages. October and November are the best months in Beijing regarding the weather. It is sunny and the air is clear. Ideal to go to the park and take your bird for a walk (in the birdcage). Some cages are hang to a tree or standing on a chair while the owners follow some other activities like singing, gambling, dancing or kite flying. If it gets cooler in the evening the bird cages are wrapped with a warm cover to protect the birds on the way home.
Posted by - Susan - 2 comments: