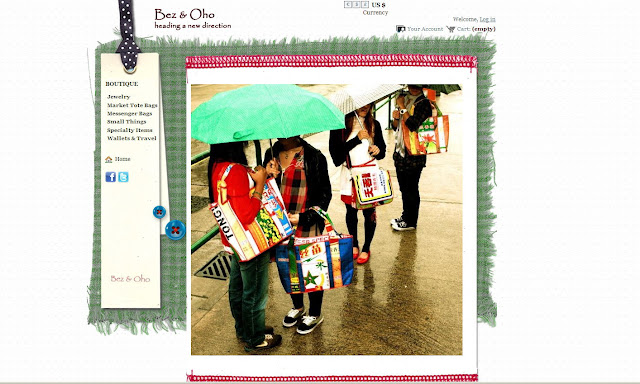 The internet is a great place to discover new things - and that's why we all love it!

Today I found Bez & Oho in Hong Kong via Nicely Made in China. And you do not need to be in Hong Kong to see their colourful handbags made of receycled rice bags. They sell online.

After my last post about HGTV calling for casting here is another urgent request from the HGTV production team. For the HGTV show going to be produced in Shanghai they need a local relocation expert who is fluent in English.

a few days ago, I found in my mailbox a message from a producer of Home and Garden Television (HGTV) who came across my blog. They are going to film a new show for HGTV in Shanghai!

The producers want to know if any of my readers or friends in Shanghai might be interested in applying to be on the show. As it is a very popular U.S. TV show, they call for American Expats living in Shanghai. The shooting will be after the golden week holiday in the week of October 10, 2011. 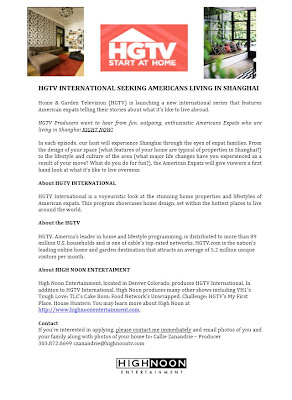 
Here the details from the press release:


Home & Garden Television (HGTV) is launching a new international series that features American expats telling their stories about what it’s like to live abroad.

In each episode, our host will experience Shanghai through the eyes of expat families. From the design of your space (what features of your home are typical of properties in Shanghai?) to the lifestyle and culture of the area (what major life changes have you experienced as a result of your move? What do you do for fun?), the American Expats will give viewers a first hand look at what it’s like to live overseas.

HGTV International is a voyeuristic look at the stunning home properties and lifestyles of American expats. This program showcases home design, set within the hottest places to live around the world.

HGTV, America’s leader in home and lifestyle programming, is distributed to more than 89 million U.S. households and is one of cable’s top-rated networks. HGTV.com is the nation’s leading online home and garden destination that attracts an average of 5.2 million unique visitors per month.

If you’re interested or if you have any friends that might be in applying, please contact the producer immediately and email photos of you and your family along with photos of your home to:
Callie Zanandrie
Producer
Email: czanandrie@highnoontv.com