Let me share with those who have not access to the Beijing based urbane magazine (left: March cover) my latest article about Chinese furniture. There is a brief introduction to Ming and Qing style and how ancient Chinese furnishing could be used to decorate modern homes. Next month an article about 'Shanghai Glam' will be published. 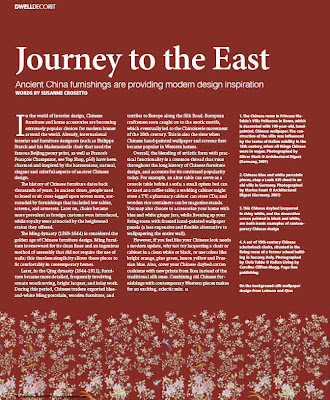 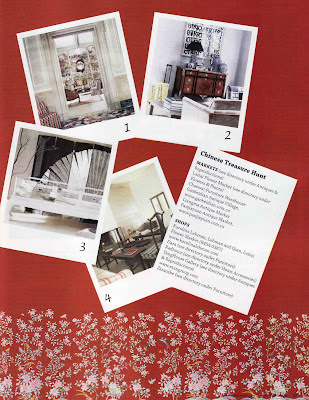 Read my version prior to editing:

While lots of young Chinese turn towards IKEA or Boloni to decorate their modern homes with western style furniture, China style is popular in the West more than ever.

The history of Chinese furniture dates back over 2000 years. The ancient Chinese knelt or sat cross-legged upon woven mats surrounded by various furnishings including low tables, screens, and armrests.

The development from sitting on the floor towards high seating was influenced by foreign customs and the migration of Buddhism. Chairs and raised platforms began to appear as the status enhancing seats of great masters. In the 12th century the use of stools and chairs was widely spread in China.

The Ming dynasty (1368-1644) was considered as the golden age of Chinese furniture. Most Ming furniture feature clean lines and have a system of assembly without the use of nails. The timeless simplicity and perfect proportions of the Ming style allow these pieces to fit even today in contemporary homes around the world.

In the same century the influence of Chinese furniture and porcelain spread over Southeast Asia, due to Chinese merchants travelling and settling in the region. In the 18th century in Thailand was a vogue for all things Chinese. Courtiers wore Chinese slippers and jackets, Chinese furniture found its way into noble mansions and temples.

The blending of artistic form with practical functionality can be seen as a common thread running throughout the long history of Chinese furniture and is the reason why it is still popular today. For everyday life, you can convert the original function of Chinese furniture and adopt it to your home needs. An altar tables can serve as console table behind a sofa. A small opium bed can be used as coffee table. A wedding cabinet might store a TV while a pharmacy cabinet can store CDs and wooden rice measure containers serve as magazine stands. And finally, accessorize your home with some blue and white ginger jars. Or hang framed hand painted wallpaper panels in your living room. This is a less expensive and flexible alternative to wallpaper a whole wall or room as you can move with your wallpaper.

Another very decorative style developed in the glamorous 1930s in Shanghai. A fusion of Eastern and Western styles including both Chinese bright colors and Western Art Deco elements created the famous so called 'China Chic' or 'Shanghai Chic' (1930s) style.

To achieve a bit of this style and vivid atmosphere in your home you can paint your walls in bright lime green or lemon yellow like it was chic at that time. Shocking pink and lime green silk cushions freshen up dark Qing dynasty chairs in Hong Kong’s private China Club. It comes in handy that the man behind the China Club, David Tang founded Shanghai Tang, an exquisite shop for China Chic where you can find some matching accessories.(more about Shanghai Chic in urbane's April edition and here on my blog)

In the 21st century China style is hotter than ever! Today, you do not even have to travel to Asia to get Chinese decorative items. Interior Design shops around the globe offer Chinese lamps, vases, wallpaper or the famous wedding cabinets. But not only interior designer are focusing on China Style. Hollywood celebrities are wearing qipao, form-fitting Chinese silk dresses. Chinese modern artists are best sellers. Stylish Chinese restaurants, bars and courtyard houses are en vogue among foreigners and Chinese.

And if you feel your Chinese furniture look 'too Chinese' give them a contemporary face lift! You could lacquer a chair or cabinet in clean white or colors like bright orange, pine green, lemon yellow and Prussian blue. You can add cushions with a cotton print or striped pattern to a Chinese daybed instead of using silk. Combine pieces of Chinese furniture with contemporary Western furniture and colorful Western oil paintings for an eclectic mix.

Photo Caption: In Rome, not far from the Spanish stairs, in a beautiful park of palm and lemon trees lives Mafalda Princess of Hessen with her family in a red colored villa. This villa has a Chinese Salon decorated with an impressing over 100 years old Chinese hand painted wallpaper. The construction of the villa was influenced by the taste of the Nobles of the 18th century. This was when Chinese Salons were en vogue. ‘Such a room used to express that you were well-educated and widely travelled’, tells the Princess.

other photo Caption: Take a look into today's interior design magazines. Pictures of beautiful modern houses with blue and white ginger jar on a chimney or a horse shoe shaped Chinese chair in a hallway are never missing.

Treasure Hunt: In Beijing you find lots of treasures by exploring Panjiayuan Antique Market, Gaobeidian Village, Chaowai Furniture Warehouse, Liangma Antique Market or some local decorating shops like Dara or Zizaoshe. Others more pricey: Radiance, Shanghai Tang (Remark: These and more addresses can be found in "urbane" magazine and “Insider’s Guide to Beijing”.)
Posted by - Susan -

Came across your blog when I was trawling through Google for interior design blogs. Really like what you write. I have recently started an interiors/art/antiques blog: http://colcol.blogspot.com and I'm writing about my interiors projects. Agree with you on livening up furniture with bright colours; my blog today shows a modern console, (a square within a square), that I have made lacquered in yellow. I also use a Chinese wallpaper fragement in the dining area, and bright red lacquered Regency dining chairs, (two of which are in the hallway photos). I would like to link you to my blog, if that would be OK?

As soon as you get hold of attractive and sophisticated mobili per ufficio from furniture stores located near your place or from an online furniture source, you need to place them properly at appropriate positions in your office for a better and captivating look. Just revamp your office by arranging the purchased furniture items at proper places and add certain arredamento ufficio accessories such as wall units to your office decoration, for that great motivational look.

You can see an Asian influence in home decor in the San Francisco Bay Area. We have many people living here from your part of the world.

Great story! Congratulations on getting published so much.

It's been a while since I checked in - I've just been so busy travelling. Good to read you again. Beijing must be a very exciting place to be right now. Is it?

This is a nice article though there is so much more to discuss on this topic. "How to buy chinese antique furniture," and also "how to tell if its an antique" seem to be some of the most common questions people ask me. Also, while it often looks great, a lot of Chinese furniture is unfortunately, not very comfortable unless you modify it first. These would definitely be worth discussing.