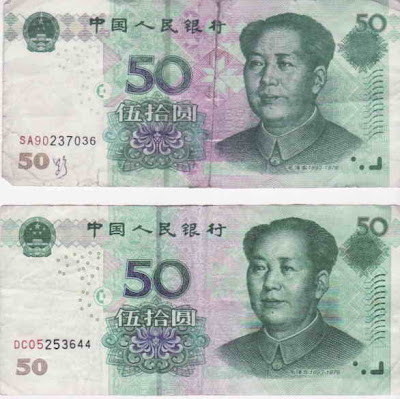 For the first time in my life I hold fake money in my hands! Counterfeit money, funny money, bad money, bogus money, false money... whatever it is called.
Where is it coming from? - From my purse! I don't know who dared to give it to me! To the naive laowai who cannot tell the difference. - Now I can!

Can you tell the difference? One is real, one is fake.
It is the 50 yuan bank note (equal to 5 Euro).

But how did I find out? In jail?
No, no. Not that dramatic.
I left it for my ayi today, because we were waiting for the water to be delivered (two barrels of drinking water). When I came home I saw the change - but my 50 yuan bank note was still there. And before I could ask, ayi was telling the story: The guy from Jenny Lou, the supermarket that delivers the water, did not accept my money. It is fake. - What? While our driver was examining the bank note I took out another 50 yuan from my purse to see the difference. Now you see the two together, scanned for this post.

Since this afternoon I am more careful. I never watched out for fake money although everybody checks my 100 yuan notes wherever I pay. Probably because I only get 100 yuan bank notes from the ATM machines. The highest value of a Chinese bank note is 100 yuan (10 Euro). But the 50 yuan bank note comes back to you with change. And among the real ones might be the counterfeit ones.

So if you are in China and want to pay attention to the change given to you (according to our driver only 100 and 50 yuan notes are counterfeit), here is a quick lesson about how to recognize a false yuan bank note: 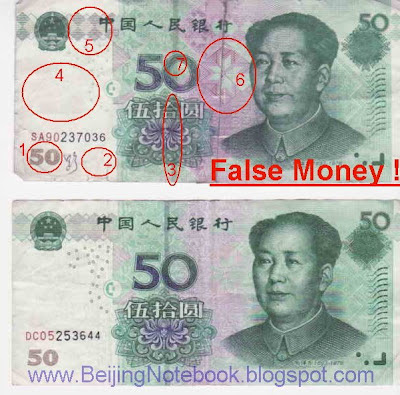 It is easy. Just remember point 1, 2 and 3 !
The other points show differences you only see when you compare the false note with a real one - and of course depend on the source.

1
The '50' is shiny golden on both notes, but only the real one turns green when moving (the 100 on the 100 yuan note changes to blue color)

3
The silver stripe looks almost real on both sides of the fake money. But when you hold the note against the light, only the real one has one dark non-stop stripe, while the fake one is interrupted.

4
Here is a water sign with Chairman Mao's face. Even on the fake one (that's why I think that they might even be able to do the 50 or the 100 of point 2) - the face looks slightly different, but if you have not another real one to compare with, you cannot tell. - Also the paper feels different.

5 and 6
The colours on the fake one are too bright and too much contrast between the colors.

7
The silver stripe is a bit too much on the left and a very slightly too fat.

So be careful, it might happen to you too.

I wonder if I should use my false note in some market to pay some nasty vendor... I could play the naive laowai... naughty... (and illegal, I guess).
Posted by - Susan -

I would save it, as a couriosity! maybe in "Vuitton" purse...

Yes, sure, I will keep it as a souvenir!

Meanwhile I think that I got it at the Silkmarket

Sorry this happened, but thanks for the very helpful post, especially the visuals.

They often check notes here in HK too, although not as commonly as on the mainland. I've never actually come across a counterfeit before though...that I know of!

that's awesome. Now I can tell the fake from the genuine one. Thanks!

the first time i got my fake money is in humen last year by the taxi man who fetch us to the hotel. then on our trip to the airport a few days later, another taxi trying tried to exchange our real rmb100 note to a fake rmb100. he said that the note i gave him is torn so he want another note. actually, he has already exchange my real note with a fake one and tried to give me back the money making me think that i gave him a torn note. i just came back from guangzhou this evening and the same thing happened. luckily i am smart enough and notice the fake money. so pls. be very careful especially when you pay taxi fare.

Just came home from Beijing yesterday...... ANYWAY here's a good way. Feel the note. It's textured. Try Mao's hair and on 2005 notes, there are little black dash like things at the right of the note. Scratch it and you can feel it.

Wow, thanks to you all for these great hints.