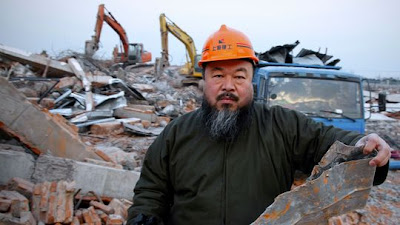 Artist Ai Weiwei in the ruins of his demolished studio in Shanghai in January 2011 (via Getty Images)
Ai Weiwei (or Ai Wei Wei), probably the most internationally known Chinese artist who often criticises the Chinese Communist Party for many good reasons, is still detained in Beijing by police since April 3rd.

Ai Weiwei's international popularity allowed him - so far - to express outspoken social critics without being arrested. However, according to himself, he was dangerously beaten up by Chinese police while protesting in Sichuan after the 2008 earthquake where hundreds of schoolchildren died due to poorly built school houses.

There are many other Chinese artists that make money by selling art to the international market that's subject is criticising former chairman Mao. But there are not many artist that dare to openly criticize the actual government.

Although, Mr. Ai continuously built up international relationships with galleries and museums in the US, UK, Germany, Netherlands, Austria etc. and additionally used the new media twitter (#Aiww) to create a kind of public protection around him, he lately was under house arrest in Beijing and now is detained.

I am really sad and shocked to hear what happened to Ai Weiwei.
I liked to live in China, I liked Beijing.
I like the Chinese cultural heritage.
China's economical power is growing and Chinese citizens are proud of their nation.

Why on earth does the Chinese government need to detain this artist?

Most of the Chinese citizens will not care about Ai Weiwei, I am afraid. They will believe the government that this silly old man has committed a tax fraud or so.

When I say "FREE AI WEIWEI", I am not (only) saying that to the Chinese officials, I am saying this to the Chinese people. Please, stand up, stand behind him. His critics are human. He is not asking much. He is a bright and intelligent man. His art is not commercial as the one of many others. He is doing this for a better China. - When this man is arrested, they can arrest anybody.

When the German chancellor Merkel is asking to "Free Ai Weiwei", most of the Chinese people will not understand her and dislike this involvement - as they did, when she said something in favor of the Dailai Lama. Chinese citizens are proud of their nation, once again, they do not like to be criticised by the West.

It is like someone is talking bad about your parents. You need to grow up to understand that your parents are not always right. It feels like most Chinese have not grown up yet. And this is why I feel sad for Ai Weiwei: While he is putting his live at danger to improve human rights in China, most of the Chinese don't care.

This dilemma drove him abroad where he made sure his concept work and installations become well-known in the art world. But as a Chinese born he also feels connected to China and therefor lives in Beijing with studios in Beijing and Shanghai - the latter was demolished by the government in January 2011. However, he was said to open a gallery in Berlin soon and even move there. He must have felt very unsafe.

It is in the Chinese mentality that critics are not appreciated by superiors. - Will this ever change?

UPDATE May 3rd:
Still nobody knows where AWW is detained.
A friend gave me this link to read:  http://www.economist.com/node/18560351, an article about China's recent crackdowns by The Economist from April 14th, 2011

UPDATE May 16th:
His wife met him yesterday (May 15th) for 15 minutes after 6 weeks of no notice. They give him his medicine, they do not torture him. At least a sign of life. His wife said, he seemed very quiet/serious and only said he does not understand for what he is accused. More discussion on this subject was not allowed during that meeting.
I hope they will let him go soon.
Posted by - Susan -

There is a big crack down and Ai Wei Wei is well known and therefore gets a lot attention.

In addition to Ai Wei Wei, there are many lawyers, for example, defending less fortunate who have been targeted, including lawyers involved in consumer rights (which elsewhere would not be considered to be controversial). For example, the lawyer who represents the parents who have had children affected by the Melamine contaminated milk has been put in jail. Another lawyer involved in disabilities right has had the same treatment. Unfortunately, China is going through a more conservative period and it is really sad to witness.

When artists leave the safety of aesthetics, ideas can be powerful weapons....

thank you for taking your time to reply to my question and for your insight from Beijing directly.

We do not have to forget that blogger is blocked in China... and there, I understand, that you are now careful about what you say on the internet.

thanks for your comment, I was waiting for someone who sees it differently.

And you know what? I guess you are right. He might have tax issues, because this is what many people have when working internationally.

And probably they waited until they had something in hands against him. - But why was he "kidnapped" for 6 weeks? No sign of life for 6 weeks!

Now, we know he is alive. But for tax issues you usually get a clear open accusation, a lawyer and a court case. And yes, you might end up in jail.

AWW case is supposed to scare other critical voices off, right? Now, only HK based artist dare to say something.

Dear Anonymous, do you live in mainland China or abroad?

If in mainland China, do you feel comfortable to live in a country where everyone could be taken away in full daylight?

For a foreigner like me it feels scary. Writing this comment and the 2 posts seems to me already not politically correct and I would sweat at immigration control... maybe paranoid, but is it?

If you read this, I would be pleased to hear from you again.