No Shitting in the Toilet 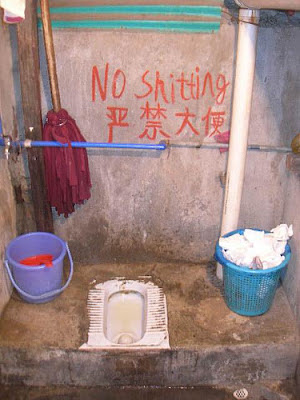 Public toilets should be avoided in China as long as you can!

Better hold it until you find a five star hotel or restaurant with clean western style restrooms.

However, going to a public toilet could be an adventure you can talk or even write (!) about.

Recently, I had to use a public toilet in Liulichang, a nice pedestrian lane in Beijing downtown. I thought in the morning hours, I might find it ‘ma ma hu hu’, so so, and not too disgusting. Wrong! Hold your breath!

I went inside. Of course there were no doors in front of the ‘peepee boxes’. The first two boxes were occupied… in the third one, watch out, shit was lying BESIDE the hole. Beside the hole! Who the h#ll is shitting beside the hole?!

I have never before heard about the ‘no shitting in the toilet’* rule.

I stepped back, and walked further. In the next box a woman had exposed her used sanitary napkin... Aahhhh! Horrible! I walked back and forward again, confused, and at the end, wow, surprise, I saw that little western style toilet with a wooden seat. I guess, this is for the older woman that cannot squat. I was breathing through my mouth. The smell was intense. And I was done faster than ever.

Rushing out, thinking I made it, I got the next shock. No sinks anywhere to wash your hands! I stood already in the street and looked at all these Chinese walking by. I had this terrible feeling that they all did not wash their hands... So, this was Beijing downtown. A nicely renovated pedestrian zone.

Another day, another terrible toilet was near the Great Wall. There they did not even have separated boxes. Just a long dump you have to squat over and try to do your business. I did not dare as I was afraid to faint and fall into the dump... 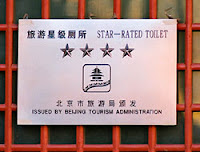 But there is good news. In preparation for the Olympic Games 2008 everything seems to improve - including public toilets.

Recently, I came across a public toilet at a temple far away from the city. First, I thought this will be just another terrible experience. But no! Surprise, this toilet was 'four star rated' by the Beijing Tourism Administration! I was very impressed indeed! There were doors in front of the cabins! There were several western style toilet seats. It was a real water-closet, you could flush! There was a sink to wash your hands. And there was a hairdryer (just in case you needed to wash your hair in the toilet(sink)?)... My friend told me that major tourist attractions have star rated toilets nowadays.

So don’t worry. If you are thirsty, drink, you don't need to hold it, toilets improve.

Check out more about toilets at The Beijing Guide

---------
* ) After discussing my toilet experience with other Beijingers I learnt that there is a toilet regulation for public toilets that have no water flush. No shitting into the toilet avoids congestion. There seems to be professional shit collectors that come by with their cart and take away the shit.

----
Update March 2013:
Recently, a friend sent me an article in a German newspaper, saying that there are new regulations for public toilets. First, they should not be too smelly (what ever that means) and second, the amount of flies should be limited (no April fool's joke). It was not stated who would be in charge to monitor the flies to ensure a public toilet meets the target.
Posted by - Susan -

ok.....people might complain about us Americans but one thing we do well are toilets......our toilets are the best...I have a son living in Beijing and the toilets almost made him come home straight away.(He is still there 3 years, now.)

I ran into a very similar experience in Morocco.. while I appreciated everything about this lovely country, I couldn't wait to get back to the hotel to use a western style restroom.

I beg to differ, I'm an Australian who has been to US and Japan and I've got to say, Japanese toilets kicks arse!

@cewek: you are right, Japanese toilets are amazing! Washing and drying included! Love the seat heater too ;-)